I've been writing some more articles about film, which various websites have been kind enough to publish.

Oddly enough, this has turned out to be two pieces on films by director Alan J. Pakula, and two on movies starring Vincent Price (there is no intentional link between Price and Pakula, their work could not be more different!).

Firstly, a piece celebrating 45 years of Pakula's masterful All The President's Men for Film Cred here.

Secondly, a celebration of 50 years of the extraordinary thriller Klute for We Are Cult here. 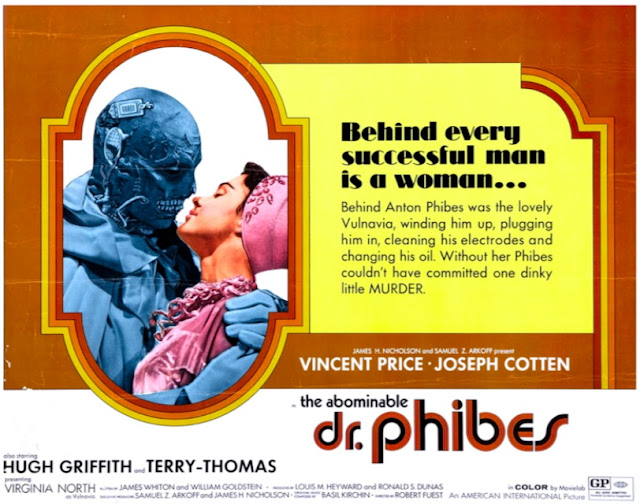 And last but by no means least, another article for Horrified examining the final two UK-filmed movies in Roger Corman's Edgar Allan Poe series here.

I hope you enjoy them.

Posted by Johnny Restall at 03:18 No comments: 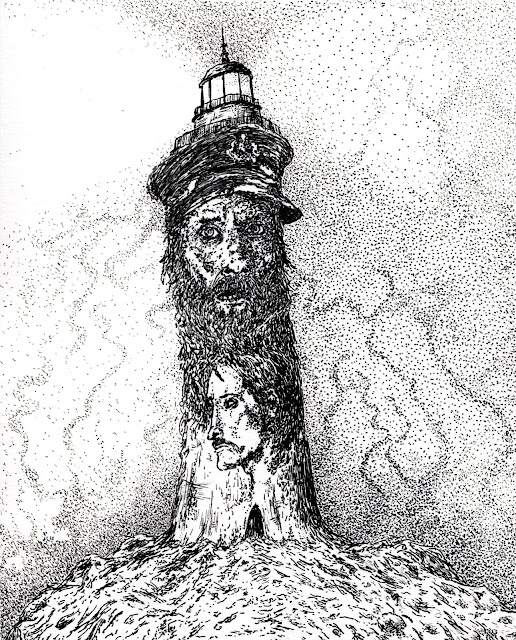 The following piece was originally written for a reviewing competition. It wasn't shortlisted, but I'm still quite pleased with it, so I'm uploading it here, along with my doodle to illustrate it. Enjoy.

A thick sea fog obscures the landscape. The keening cries of circling gulls fill the air. Indistinct shapes slip slowly in and out of focus. Can you be sure of your senses?

So begins and ends Robert Eggers’ The Lighthouse, a film so awash with sea spray, mystery, and uncertainty, that you can almost taste the harsh, salty mist on your tongue.

Shot largely at Cape Forchu, Nova Scotia, Canada, and based around a 20-metre high lighthouse specially constructed for the production, the film tells the tale of two keepers tending their isolated post in 19th century New England. As the weeks pass, and the storms set in, their relationship and their grip on sanity frays like wet rope racing through calloused fingers.

The story is a duplicitous, deranged duet between the younger novice keeper Ephraim Winslow (Robert Pattinson) and his senior Thomas Wake (Willem Dafoe). Ephraim is closed, taciturn, and evasive, with secrets and longings beyond his current situation. Wake meanwhile is garrulous, ferocious, and strict – we first meet him loudly breaking wind, and he seems the very embodiment of a crusty, cussed seadog, almost to the point of parody. Yet neither man is quite who they seem, and the viewer is left increasingly unmoored between two highly unreliable characters as perspectives shift and blur, with no objective witness to confirm our interpretation of the events.

The only female character is a hallucinatory mermaid (Valeriia Karaman), a recurring source of both fascination and fear in Ephraim’s masturbatory fantasies, his attraction to her seeming to parallel his ambivalent feelings regarding Wake. The tortured relationship between the two men is by turns Oedipal, confessional, homoerotic and antagonistic, Pattinson’s pretty but increasingly drained youth duelling with Dafoe’s angular, weathered face and sinuous, rolling beard.

At times, their interactions almost resemble a bleak domestic sitcom, as they bicker over chores and squabble over cookery (with Wake almost comically heartbroken when he finds that Ephraim hates his lobster stew). The old-fashioned, nearly square aspect ratio of the film serves to increase the tension and claustrophobia, trapping the characters in a tight box rather than the broad horizons of contemporary widescreen.

At the heart of their dispute is Wake’s possessive ownership of the light itself. He refuses his covetous junior any access to the top of the tower, where he seems to spend his nights in almost atavistic worship of the lantern’s power.

The film is not subtle in its many cultural allusions. Wake makes explicit reference to Prometheus, and the source of the disagreement between the two protagonists appears to mirror the Titan’s desire to steal fire from the Gods. Prometheus is not the only mythological figure alluded to either, with Wake appearing to visually morph into some sort of Protean sea-god in one particularly wild moment during their struggles.

There are also clear nods to Herman Melville, in both the dense semi-biblical language used, and the ambiguity underlying the frustrated, tense and tangled male relationship depicted. The sea-bound setting also provides ample opportunity for suggestions of the slimy Cthulhuian horrors of H.P. Lovecraft, with an added seasoning of Freudian psychosexual symbolism on top for good measure.

It is testament to the skilful execution of The Lighthouse that it does not crack under the weight of these pretensions. Eggers’ direction is assured and ambitious, seeming undaunted by the challenges of the screenplay (which he co-wrote with his brother Robert, very loosely based on an unfinished fragment by Edgar Allan Poe, as well as the historical Smalls Lighthouse Incident in Wales).

The astonishing performances of the leads are captured exquisitely by Jarin Blaschke’s silvery, atmospheric black and white cinematography. The look of the film deliberately draws on 19th century photography, shot using orthochromatic film (which is sensitive only to blue and green light). It also recalls the dark etching style of artists such as Gustave Dore, with one striking scene even explicitly restaging the painting Hypnosis (1904) by symbolist Sascha Schneider.

Mark Korven’s unnerving soundtrack almost becomes an additional character in itself, deliberately blurring the line between sound effect and score. Foghorn blasts drift into atonal drones and bursts, at times recalling the way Stanley Kubrick used existing avant-garde classical pieces in The Shining (1980). (Kubrick’s masterpiece is also visually recalled by a brief axe pursuit, and in the slightly surreal, alienating tone of the film.)

As with Eggers’ 2015 debut feature The Witch, The Lighthouse is perhaps unlikely to please all audiences, with its mysterious, shifting narrative and measured pace. However, for those prepared to sink into the strange depths of its watery embrace, it is a unique and richly rewarding experience, and, like its predecessor, demonstrates just how broad and fascinating the horror genre can be.

Posted by Johnny Restall at 06:55 No comments:

Short Stories and yet more writing...

I've been doing some more writing. 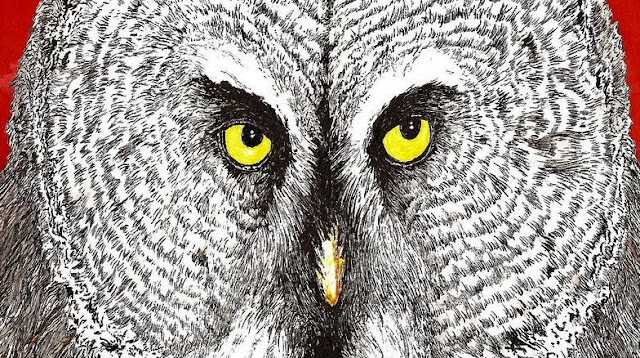 Firstly, I'm very proud to say I wrote a piece of very short 100-word fiction, for a competition with Lightbox. Although I didn't win, I did make the shortlist of the final ten, which was far more than I'd expected. You can read my story "Great Grey", along with the other shortlisted entries here.

I've also come up with a slightly more personal article recalling the impact the brilliant Usborne Supernatural Guides had on my childhood, which you can find here. 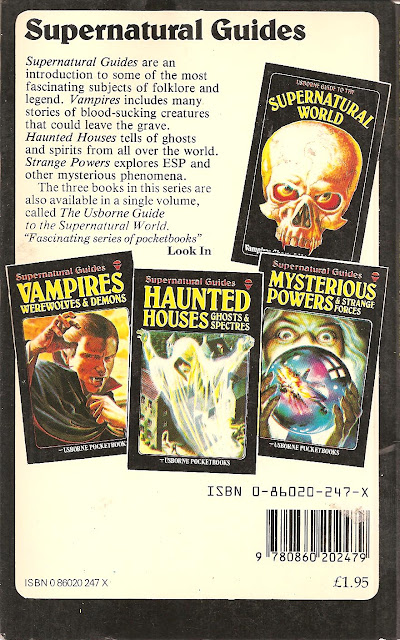 Posted by Johnny Restall at 02:32 No comments:

Ghost Stories For Christmas and other work

I've contributed an essay on The Signalman to a magnificent retrospective piece Horrified Magazine have curated about the BBC Ghost Story For Christmas series. You can read it all on their website.

Here is my illustration to go with The Signalman: 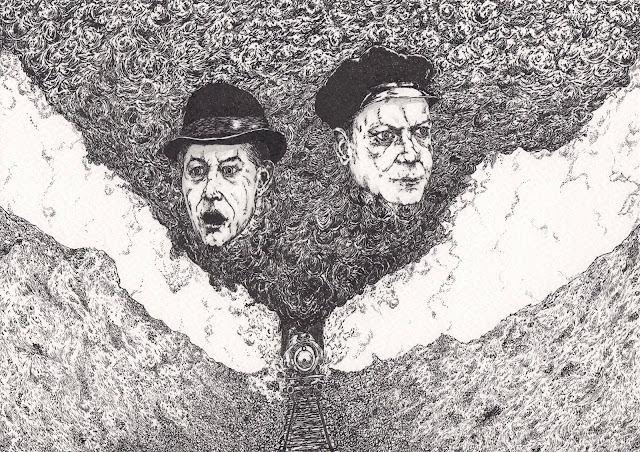 I've also wrote a couple of other articles for them in the past month.
One was regarding depictions of the Devil in British Horror, which you can read here.
The other was on Richard Fleischer's grim masterpiece 10 Rillington Place, and can be found here.
I hope you enjoy them.

Posted by Johnny Restall at 05:46 No comments: 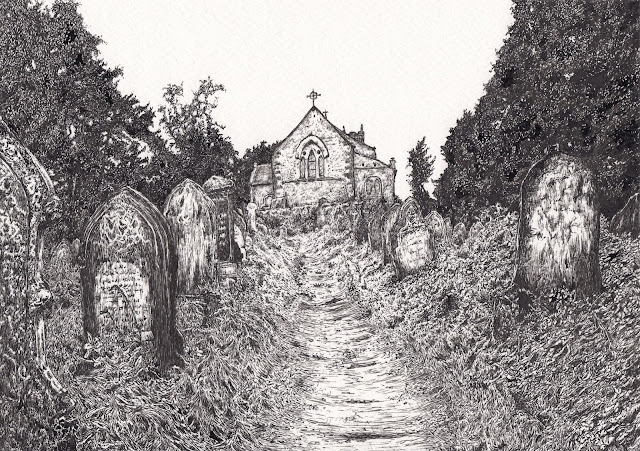 An inky drawing of Taxal Churchyard, near Whaley Bridge, High Peak.
Posted by Johnny Restall at 02:11 No comments:

I've written a couple of articles for the new website / magazine Horrified, which covers British Horror in all forms (films, TV, books, new fiction etc). They've built up a fantastic website with some really interesting pieces, so I'm very proud to be involved too. 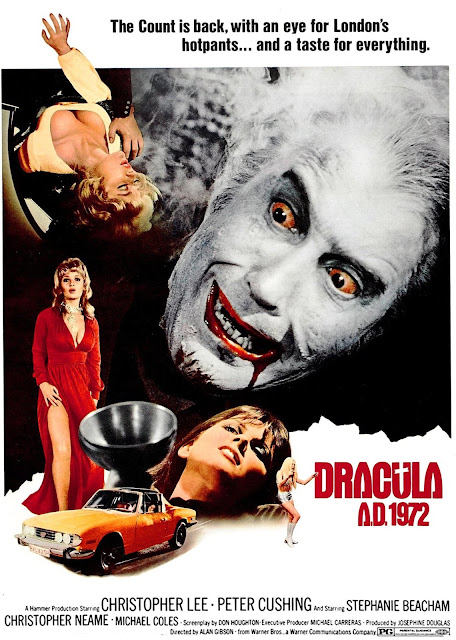 The second is on the 1964 thriller Seance On A Wet Afternoon, and can be found here. 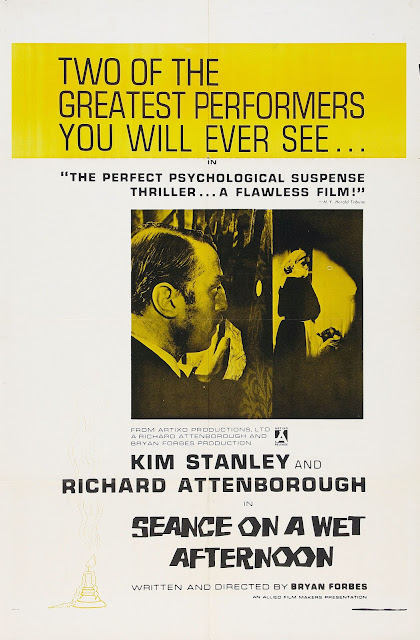 Hope you enjoy reading them as much as I enjoyed writing them.

Posted by Johnny Restall at 00:40 No comments: